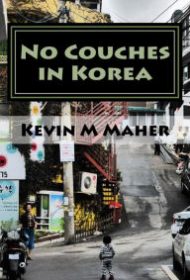 This warm memoir of the 1996-97 stint the author spent as an English instructor in Pusan, South Korea, and of his several long returns, reveals a young Michigander seized by “a perpetual wanderlust spirit” who found his truest self in a land of kimchi, butchered dogs and restless fellow ex-pats.

In an Author’s Note, Kevin M. Maher states that he took some liberties with character origins, names, quotes and incidents, but that “about 98% is nonfiction and factual.” Here, the character Adam Wanderson serves as his alter-ego.

Adam arrives in Pusan at 26, untrained, bereft of the Korean language and predictably enamored of those youth anthems On the Road and The Catcher in the Rye. Soon, Korea becomes “just as much a home, if not more, than anywhere else ever was.” He develops a seat-of-the-pants teaching method, makes friends and relaxes.

But Adam is a moody, searching soul (“I was getting more withdrawn and sick of everything”) who never really settles: Before book’s end, he runs off to Southest Asia, Europe, South America and the U.S. He now lives in Macau. Twenty years after his first visit, he returned to Pusan, where he handed out copies of the present volume to strangers.

Maher obviously loves Korea and its people: He writes clearly and affectionately about everyone from the old men (ajussi) who sit down uninvited at his dinner table, to the city’s reckless bus drivers, to the mysterious Korean girls he desperately wants to romance. His tone is full of hopeful yearning, tempered by the sense that he will never quite belong, “being that foreigners were perceived as outside any Korean cultural norms.” While he tells us little about Korea’s geography, history, powderkeg politics or rich culture, his relentless bar-hopping and girl-chasing, and the unruly habits of his fellow teachers at the city’s adult language institute make for entertaining reading.

Readers may yearn for more detailed perspective on the country that has bewitched him for so long. Still, Maher makes his journey largely worthwhile in these pages.