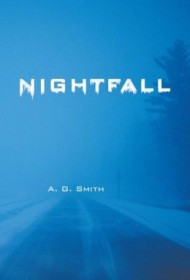 A.G. Smith writes of the impact of a worldwide catastrophic event on residents of rural southern Illinois; it’s not the apocalypse, only the near-end of the world they know.

During a sweltering carefree Fourth of July holiday, the world suddenly is “surrounded by total darkness,” ushering in a new era that includes freak blizzards, tornadoes and earthquakes. Although Renee Ketcher is the main character, Smith introduces young couples, elderly farmers, small families and many, many others as they face this new normal.

With its overwhelming tales of death and destruction caused by Mother Nature — a development that its characters don’t understand and can’t explain ¬— this terse novel throws a punch. Still, Smith could have created a more powerful narrative by focusing on fewer victims and more fully developing Renee, who is originally from Paris, becomes an Army wife and settles in the rural community, yet there’s no mention of any adjustments she has had to make to her new life. Oddly, her voice is filled with country idioms rather than French ones.

Another distraction is Smith’s propensity for underlining words or phrases as a means of emphasis. It was also unnecessary for Smith to repeatedly note the time frame when darkness first fell. Each character registers a change in the atmosphere around 4:30 p.m. on that July 4th, with the calamity striking 30 minutes later. One or two reminders would have been plenty.

Smith’s message is ultimately about neighbors helping neighbors in times of crisis, but further elaboration, or examples of character transformation, would have provided more weight.

The mystery of what sends the world into darkness is eventually explained. Although everyone is cut off from each other, occasional working phone lines and short wave radios provide details of the cataclysm that has occurred. What doesn’t make sense is how the survivors are able to continue having access to food, schools and livelihoods. Ultimately, too many questions remain unanswered to render a credible story.