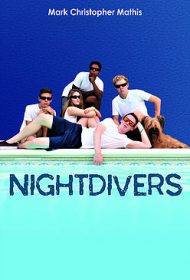 In Mark Christopher Mathis’ fourth novel, a man who tried to commit suicide as a teen regains his footing when offered a job helping blind teens learn to swim.

Mike’s life has been filled with trauma. As a teen, he was a record-setting swimmer, but when he became distraught over the loss of a girlfriend, he attempted suicide. Although the bullet didn’t kill him, it left him blind, until an operation miraculously restored his sight.

Years later, he quits his mundane construction job for one he’s perfectly suited for: teaching five blind teens to swim. Here, the author beautifully portrays the common teenage dramas the students face and how their varied problems are magnified by their blindness.

Although the book begins with Mike’s story and the progress of the teens’ swimming prowess is the story’s major thread, the lives of the students outside of the classroom are the most engaging part of the narrative. When the story switches back to the swimming instructions, it loses momentum. Some scenes offer too many trivial details, such as Mike talking about pool shoes and the paperwork he must attend to, and, disappointingly, the final race against able-sighted teens is predictable and anticlimactic.

However, Mathis’ characters are relatable and he has a wonderful gift for vivid and original description: “Through blurry eyes he saw the front of the car squeeze inward…[H]is parents disappeared into the collapsing metal…[He] saw bright lights spider web out of his vision like a splintered mirror.”  And: “Everything about the way he carried himself was unsettling, and even his clothes seemed angry.”

The story would be more appropriately geared to its intended young adult audience if less attention were given to Mike’s character and more to the teens’ complex lives. Nevertheless, young readers will surely look forward to further work from this author. Mathis has created vivid and memorable characters, and his descriptions are so good that his audience will savor them.