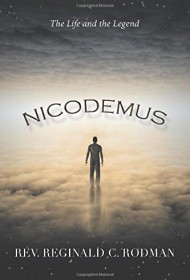 In this short volume, Rev. Reginald C. Rodman attempts to capture the mystery and allure of Jesus through the first-person perspective of Nicodemus. Nicodemus appears in the Bible three times: once to discuss Jesus’s teachings with him, once to defend Jesus in front of the Sanhedrin, and finally to supply the embalming spices for Jesus’s burial.

Rodman accurately depicts Nicodemus’s encounters with Jesus while taking artistic license by adding additional characters and modernizing the setting. Nicodemus, the cigarette-smoking, car-driving, coffee-drinking member of the supreme council of Israel, the Sanhedrin, is a relatable character rather than the stuffy, solemn guy we know little about from ancient times.

Rodman’s version of Nicodemus reads the daily paper, yet we hear very little about the major events of Jesus’s ministry. John the Baptist is mentioned, as well as the man healed by the pool, but nothing of other healings or miracles, the feeding of 5,000, or the raising of Lazarus or the daughter of Jairus. The overall pacing of the story is odd. After 100 pages of Nicodemus searching for the truth about Jesus, the entire arrest, trial, and death of Jesus is compressed into one paragraph.

Given the intended audience of this book—Christians interested in a different perspective of Nicodemus—the amount of profanity is excessive. The manuscript also needs a proofread to fix issues such as missing quotation marks and typographical errors (“lames” vs. “flames”; “haven’” vs. “haven’t.”).

Once the Nicodemus story is sealed up, the book delves into a disjointed series of chapters—varying from a paragraph to several pages long—on a miscellany of topics that have nothing to do with Nicodemus. Some chapters consist merely of a heading with no content.

While some readers may enjoy the Nicodemus portion of the book, they will leave confused about the purpose of the last 50 pages, making for a decidedly uneven read overall.