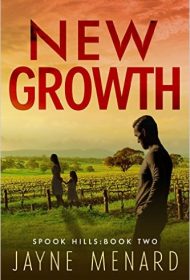 In this lite yet inventive romantic suspense novel (second of a trilogy), a retired FBI agent woos a married woman despite distractions when threatened by an old drug cartel case that resurfaces.

While busily developing an Oregon vineyard, retired FBI agent Mathew Heylen is drawn to Callie, a neighbor’s niece, who is in an abusive relationship and worried about the safety of her nine-year-old, Susannah. Meanwhile, across the ocean, Cruze Fuentes and his cousin Julio are plotting to avenge the death of Cruze’s brothers, who they believe were killed by FBI agents because of their illegal drug involvement.

When Mathew and his colleagues realize they are the targets, they jump into action to solve the case before they and their loved ones suffer. The situation gets more complex as the intriguing past behind Cruze and Julio is revealed.

The novel’s early pages are filled with information from the first book, resulting in a tepid start, and too many details are offered in a passive voice rather than played out in active scenes. But once the plot revs up, the story gains complexity, leading to a satisfying, fast-paced ride to the conclusion.

The book brims with keenly researched details on wineries, artistic glass working, and FBI case-solving embedded within a somewhat predictable romance and soap opera-like stirrings involving questions of paternity, maternity and even sexual identity. Perhaps the most compelling element rides on the drug traffickers’ backstories.

While the characters are nicely drawn, some dialogue feels unnaturally eloquent (“Today’s structures lack such rambling allure”) and occasional descriptions seem forced, such as detailing a suit that “flowed over him like grass on a gently sloping hillside.”

Nonetheless, this novel makes for a satisfying beach read with bonus details for those who love learning.