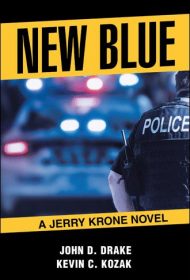 In fifth grade, Jerry Krone was praised by his father and classmates for standing up to a bully. The incident not only shaped his values about doing the right thing, but it also led to his career, beginning at Fortuna Beach Police Academy.

Krone describes the shared experience and sage advice imparted by senior officers along with the realization that “police work had many more dimensions than enforcing the law or being punitive.” Police calls increase the action, with cases ranging from criminal mischief and money scams to a narcotics raid and suicide.

The narrative includes a subplot of an adolescent Peeping Tom whose actions are escalating. Krone’s rookie involvement in the investigation and its outcome is somewhat predictable, and his surprise at how things play out seems rather forced. Additionally, the book requires proofreading for errors and detail discrepancies (one recruit’s assigned shooting range number changes from 15 to 9, for example).

Drake and Kozak nicely balance Krone’s training with his romantic interest in a female classmate. When she becomes disillusioned by tragedies she encounters on the job, she questions her commitment, offering a glimpse of the impact police work has on personal life.

With recent headlines highlighting incidents involving police brutality, this book provides insight for those seeking better understanding of what’s involved in becoming a police officer, including personality traits necessary for this career—all wrapped in an engaging fictional tale.