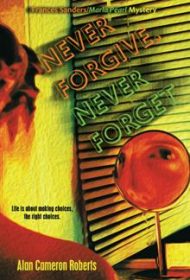 Two sisters, cruelly separated 35 years ago, are reunited when one of them is accused of murder in this contemporary mystery set in Sarasota, Florida.

When Precious Pendrick is found standing over the bloody body of her boyfriend and holding the murder weapon, local police believe they have an airtight case against her. Enter her sister Rose, now known as Frances Sanders, a successful stage and screen actress, who is determined to prove Precious was framed. But rather than hire a skilled private investigator, Frances disguises herself as a streetwise PI she calls Marla Pearl, to investigate the circumstances that could put her sister on death row. It will take all of Frances’ skills as an actor to uncover the real killer and survive a murder attempt against her, which is the book’s finest moment.

The book’s first half moves slowly, but gains momentum as Frances gets closer to the truth. Technically, this novel is well written and more disciplined than the author’s previous work, Bakeur’s Dozen, a freewheeling, humorous story about art theft. In contrast, this book is a sad, dark tale of a family torn apart by sexual abuse, abandonment, and long-held resentment.

The premise is somewhat flawed since the childless Frances, successful in her field and married to a doctor, could have afforded the best possible professional help for Precious rather than risk her own life in pursuit of justice. And while the story includes some clever plot twists, it is hampered by the author’s portrayal of the staid and somewhat boring Frances. Although bighearted, kind, determined, and brave, the actress is also prudish and starchy, coming across as more bland than inspiring. Also, the book lacks a contemporary feel, reading as though it were written in the ‘80s and minimally updated.

In the end, those who appreciate Never Forgive, Never Forget will find it appealing on the basis of competent writing and pacing, rather than plot credibility and edge-of-your-seat excitement.