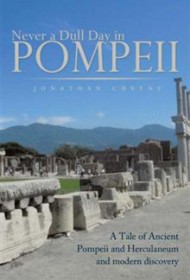 This debut novel blends fact and fiction, using the ruins of Pompeii to tell a modern story.

In Never a Dull Day in Pompeii, Jonathan Cheyne, great-great grandson of adventure writer H. Rider Haggard, recounts the fateful meeting of English couple James and Sandra Carold, and amateur archaeologist and psychic researcher Malcolm Manston. After a chance encounter, the Carolds become enthralled by Manston’s tale of aiding an excavation of Pompeii, using his unique talents to discover the location of a large cache of Roman gold, still buried under the volcanic ash.

The Carolds join forces with Manston to raise funds to uncover this gold, leading to their own adventures in England and Italy with ruthless antiquities smugglers, corrupt officials, and Eastern European henchmen. Along the way, they meet many new people, each with their own interesting histories and role to play in finding the treasure. They also learn more about the details of the famous Vesuvius eruption, modern excavation techniques, and anti-spying countermeasures.

While the premise makes a fascinating idea, the novel contains many long passages where necessary information is told rather than shown, slowing down the action to the point where it may discourage readers from continuing. In addition, an editor would have caught the many punctuation and spelling errors, including inconsistent usage of British and American spelling.

Still, Cheyne captures Italy’s beautiful scenery and the allure Pompeii holds over its visitors. The characters are clearly enthusiastic in their task, and readers may share in that enthusiasm while rooting for them to overcome all the obstacles set in their path.