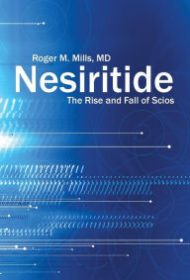 At a time when Big Pharma is under increasing public disdain, author and cardiologist Roger Mills offers a fascinating insider’s look at the complicated and at times contentious process of taking a promising drug through federal review and then to market—only to have it all come crashing down.

In Nesiritide: The Rise and Fall of Scios, Mills tells with exacting detail the development of nesiritide (marketed as Natrecor), the next big thing in treating decompensated acute heart failure. It’s also the story of how a small Silicon Valley biotech company, eventually gobbled up by Johnson & Johnson, pins its hopes on one product.

Mills has a unique perspective, as he was front and center in studying the drug’s effectiveness and later became an executive with the start-up. He writes with authority about a thrill that turns sour amid the growing drumbeat of criticism about the drug’s risks and whether it is the best treatment. “While the crowd cheered and the cheerleaders danced, the referees quietly moved the goalposts,” Mills writes.

The author presents a point of view in his telling, but the writing is clear-eyed and straightforward. Towards the end, he quotes a medical journalist who noted that those who criticized the drug for its risks were wrong because it was found to be safe. And those pushing the drug were also wrong because they had overstated its effectiveness. “In the end,” wrote the journalist, “everyone was wrong.”

Mills works hard to make the arcane accessible, including scenes like the joyous national sales manager dancing on a table to Hootie and the Blowfish. He’s a gifted writer whose biggest stumble is letting his own expertise get in the way. It’s not always necessary to explain every technical detail, and such detail may deter some lay readers. Still, this is an important story well worth reading for scholars and those with a strong interest in the topic as Mills pulls back the curtain to a mostly hidden world.