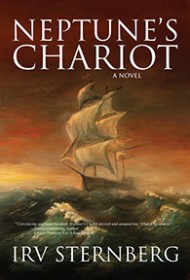 The author of several well-received regional mysteries, Sternberg (No Laughing Matter, 2007, etc.) hits his literary sweet spot with this imaginative throwback set on the high seas circa 1855. As the novel opens in Boston, a highborn lady named Elizabeth Godwin argues vehemently against returning with her family to her native England, begging to join her uncle in San Francisco. Within moments, our heroine has stowed away on the titular clipper, where she’s nearly assaulted by a savage crewman. Fortunately, rescue appears in the form of Captain Chance, who reluctantly agrees to carry his charge on the perilous voyage around Cape Horn.

In the book’s first half, Sternberg demonstrates a well-researched knowledge of maritime mechanics, describing the tedium of the doldrums (times when sailing crews were forced to wait for the wind to pick up, often while baking in the hot sun) and terrifying climbs up frozen rigging. The second half grows wilder, as the mariners race a competitor to China, fending off pirates, natural disasters, and a conspiracy among the crew.

Inspired by the true account of a sea captain’s wife in similar straits, Sternberg carves out a story that harkens back to the innocence of tales like Treasure Island while bypassing the ramrod-straightforwardness of Patrick O’Brian. Ultimately, the novel serves as a rollicking, retro seafaring adventure.