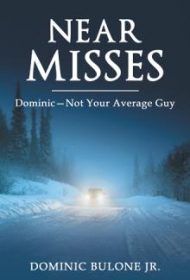 A close call, whether it’s a fender bender or run-in with a hornets’ nest, sends adrenaline into overdrive. Author Dominic Bulone Jr. describes these and other unnerving experiences in Near Misses.

Each of 20 short chapters is titled with the year an event took place. As the chapters begin, he frequently notes his age at the time, faithfully records the weather (“It was summertime. It was probably in the upper eighties or lower nineties”) and then describes what happened.

As a child, Bulone’s near misses include playing with matches and starting a fire, being hit with a rock thrown by an older child, and a tangle with the aforementioned hornets’ nest. Later, he takes chances on a friend’s motorcycle, has spin-outs while driving on black ice, and confronts danger while serving in Iraq and working in the Department of Corrections. Whatever the situation, each chapter ends with a bit of advice (“Never do stunts on a motorcycle that is too big for you”).

Unfortunately, these stories often lack context. For example, when Bulone relates a frightening story about a roller coaster ride in which he couldn’t find his seat belt, one wonders: Why was his car missing a seat belt? Why didn’t the attendant check his car after inspecting all the others? How were two boys in a car behind him able to hold him down as he struggled to stay in his seat without endangering themselves?

In an afterword, Bulone writes, “The average person would not have survived most of my experiences.” But many of his stories are extremely common: Kids throw rocks; if you wander into bad parts of town, you might encounter bad people; car accidents happen constantly. These brief accounts don’t offer many lessons beyond the importance of following the common sense that Bulone often ignored.

Near Misses might appeal to readers who like short, digestible adventure stories, but revision for clarity and context would greatly improve this offering.