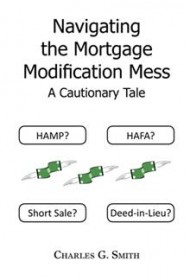 The economic recession, with its consequent housing crisis and flood of foreclosures, turned the dream of homeownership into a nightmare for millions of people such as Charles G. Smith. This slim volume details Smith’s grueling, frustrating experience dealing with clueless officialdom during a long (and ultimately unsuccessful) attempt to modify his mortgage and save the family home from foreclosure.

Smith documents three years of hacking through red tape and wrestling with flawed federal initiatives, such as HAMP (Home Affordable Modification Program) and HAFA (Home Affordable Foreclosure Alternatives), while trying to cope with the laughable inefficiency of the revolving staff assigned to his case.

Employing the same meticulous approach taken in his long career as a research chemist, Smith made notes during scores of telephone conversations and kept copies of all forms and correspondence. Using that arsenal of ammunition, he blasts away at bank officials and the creaky federal legislation hurriedly cobbled together in a futile attempt to relieve the plight of people being crushed between unpaid mortgages and unsellable homes.

With so many bullets to fire, it’s odd that Smith barely grazes the bank and mortgage company that caused him so much grief. Instead, he unaccountably protects their identities, referring to the bank, for example, by the initials TBTSNBN – The Bank That Shall Not Be Named.

Publicly airing his frustration has probably been cathartic for Smith, who, to his enormous credit, manages to maintain a wry sense of humor throughout. But Smith offers little practical help to others, with the notable exception of mentioning www.makinghomeaffordable.gov – a useful web guide to the mercurial world of mortgage relief.

In sum, the message is simple, if less than encouraging to those looking for a way out of their own mortgage struggles: if you need a mortgage modification, grit your teeth and prepare for what may be a long, tortuous and futile process.