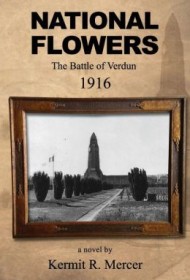 National Flowers (a reference to the soldiers of France in WWI) follows a fictional company of infantry soldiers during the famous Battle of Verdun, and in particular, the lives of three officers: Edouard Lesage, Thomas Gramont, and Larbaud Soule.

The story opens as a convoy containing Company Two approaches the battlefield around Verdun in winter, just one month after the initial German attack in February, 1916. The area is under bombardment day and night. The survival of Company Two and the outcome of the battle is in the hands of Gramont and Soule, veterans who must instruct and lead, and, later, in the resolute courage of young Lesage, who takes up the slack when the two leaders can no longer serve.

Obviously well researched and bolstered by interviews with French soldiers who were at Verdun, the book’s educational value is clear.  And although the novel reads more like narrative nonfiction and suffers from overuse of weak sentence structure, unnecessary foreign vocabulary, and distracting italicized dialogue, the story itself is poignant, fascinating, and well worth reading.

At times, it seems there could be two authors: one a military historian, the other a poet. The “poet” contributed surprising and emotionally charged observations that juxtapose the similar, if not identical, sufferings of the French soldats with their enemy German soldaten — a thought provoking and sobering perspective. In other scenes, the tenderness of Kermit R. Mercer’s prose and depth of passion bring color and dimension to what otherwise could be a tedious recounting of troop movements and battles.

By far the most compelling segments concern the wounded officer Lt. Soule, his chance meeting with recently widowed Simone in the Bar-le-Duc train station where she works, and the impact his presence makes on that small French town. From that point on, the novel comes to life.

Readers who can overlook the stylistic anomalies and who appreciate 20th century French history, especially military stories, will enjoy this fascinating novel.