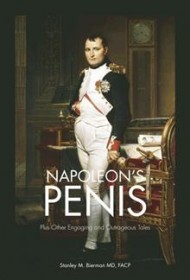 A Los Angeles dermatologist with “an upscale Century City practice,” Stanley Bierman published a newsletter for his patients from 1987 to 2000 from which these “tales” are taken. As Dr. Bierman writes, perhaps optimistically, “I figured that my patients would enjoy reading and learning of my personal reflections and experiences.”

The book offers essays that range in subject from aging to the sexual revolution to his vacations and dog Coco. One can only wonder if the doctor’s patients enjoyed reading about the “peregrination” of the French Emperor’s penis (detached from the Emperor after his death). Still, the travels of Dr. and Mrs. Bierman are described in far more excruciating detail. Trips to South Africa, Egypt, Israel, and Alaska, among other destinations, are the focus of essays that read like jottings from a diary.

On arriving in Aqaba, “Jordon [sic],” Dr. Bierman writes, “…I was enticed by the offering of a triple scooper banana split with hot fudge Sunday [sic] on the menu.” In a later entry, those who carved the astonishing classical architecture from the red rock of Petra are dismissed as “a tribe of primitive temple builders.”

That sadly recognizable strain of racism is the subject and sometimes the subtext of several essays. In one, he sees “social disorder” as the result of America’s “ill-conceived social welfare programs.” In another, he urges African Americans to “Get out there and compete. Stop whining!”

If he had stuck to the subject about which he has the most authority, namely medicine, this collection would have had much more to offer readers. The best essays include one on how a physician’s gloomy prognosis might have resulted in his grandfather’s premature demise. Another story involving actor Phil Silvers has a punch line worthy of a classic Jewish joke. Unfortunately, the book is swamped by so much personal and seemingly racist material that it’s hard to discern the reading audience that would appreciate these “outrageous tales.”