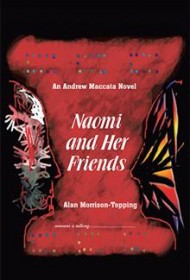 Retired British Banker Alan Morrison-Topping brings something of the armchair travel of Ian Fleming’s James Bond novels to this meandering debut novel about a sick man working out his grief on a remote Greek island.

We first meet Andrew “Red” Maccata in his doctor’s office. Having spent most of his life as a successful businessman, Red has recently suffered a psychotic break in the wake of the suicide of someone important to him. He’s something of a dichotomy, being an unreliable narrator who nevertheless has an observational mind like a steel trap.

After being warned that he’ll die an early death if he keeps drinking and indulging his depression, Red quits his job, loads up on meds, and flees gray London for sunny Greece. On his little island, Maccata becomes embroiled with three fiery women: Naomi, the hot-tempered, fast-talking bartender where Red spends most days propping up the bar; Jacqueline Joanides, known to Red as “Mrs. J.,” a wealthy gossip who tools around the island in vintage cars; and Mnemosyne, a beautiful local tour guide with many secrets she initially keeps from Red, who quickly becomes her lover.

The author is in no hurry, though, and he fills the pages with languid, lush descriptions of mouthwatering meals, local religious festivals, Red’s ferocious drinking binges, and his interactions with his beguiling hosts. The book unexpectedly turns into something of a mystery novel when Naomi shows up one day with bruises, and a middle-aged man is found stabbed to death in her bar. The rest of the novel unfolds at its characteristically leisurely pace as Red hopscotches from the island to Athens and back again to figure out who killed the mysterious stranger and how his women are involved.

Those who aren’t interested in a descriptive journey will likely be frustrated with this novel. But the author successfully keeps his secrets until the end of the novel and patient readers will find the story delivers a satisfying conclusion.

BlueInk Heads-Up: This is the first of a planned trilogy about the main character.