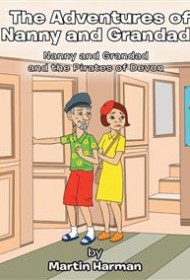 In this children’s picture book, readers get to know practical Nanny and capricious Grandad, following them on a day trip gone awry.

Nanny and Grandad are enjoying a day near the sea when they spot a ship with red sails. Grandad, who has been reading a history book about the pirates who frequented the area, becomes intrigued. When the couple heads into town for lunch, they notice the ship again. This time, Grandad climbs aboard to explore, coaxing Nanny to join him. He decides it’s a pirate ship, despite the fact that no pirates have been reported in the area for decades.

When he pulls on a rope, inadvertently causing problems on the ship, he and Nanny jump into a wooden dinghy and mount their escape. Fearing the pirates will chase them, Grandpa throws a heavy box at the ship’s steering wheel, destroying it. He feels like a hero as he and Nanny escape to dry land, only to hear later that the ship wasn’t manned by pirates after all; it was loaded with supplies for a lighthouse and lost all its cargo when running aground.

Throughout the story, Grandad’s leaps of logic are often difficult to follow, making it hard for readers to suspend disbelief. In addition, rather than supporting an amusing tale of miscommunication, his rash decision to destroy the ship makes the consequences more serious than necessary and less relatable for young readers. Children may also wonder why Grandad never has to answer for his actions.

Finally, the passages of text on each page are quite dense, which could prove overwhelming for beginning readers.

This is a suspenseful story, and the first read-through will surely yield surprises for a young audience. But ultimately, the confusing internal logic and Grandpa’s questionable actions lessen its seaworthiness and will likely prevent it from being a heavily re-read title.