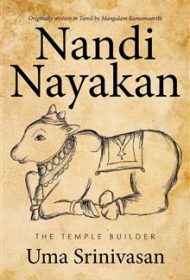 Nandi Nayakan: The Temple Builder, written in Tamil prior to this English translation, is historical fiction set in the 16th century in Vijayanagar, an empire located in southern India.

Unfortunately, neither the title nor the author’s designation of the hero accurately reflects the material. The title’s “temple builder” is only slightly addressed in last 30 pages. While Sevvappa (son of the King’s trusted official) is characterized as the hero, it is actually Dikshitar the scholar who takes center stage.

The story opens with Dikshitar discovering an unconscious man, severely wounded from an attack. Since Dikshitar assesses that the man (Sevvappa) is of high rank, he discreetly transports him to a healer. Thereafter, he receives instructions from the king to keep Sevvappa safe from all enemies. The story continues with a series of bland travels, occasionally mingled with obscure court intrigue.

Conflict and tension often goes missing. Other than the opening scenes, no further instances occur with Sevvappa confronting any real danger. Additionally, in the prologue, the writer describes an impending tragedy in which an enemy slays his niece in order to seize the throne. Yet this murderous act — desperately needed, given the lack of conflict — never materializes on the page.

Srinivasan has difficulty with point of view. Although she writes in third person, she frequently breaks out of the 16th century story to deliver a modern-day lecture about certain facts. This mix of historic fiction with doctoral thesis is highly jarring. The writer also missteps with multiple anachronisms (“anyway,” “workload,” “totally surprised”) and at times retells prior events.

Additionally, readers may get lost due to the many lengthy character names (plus nicknames) that are difficult for an English-speaking audience to absorb. Meanwhile, non-translated Indian terms for clothing and food merely confound.

Srinivasan conveys an earnest sincerity with this work. However, her book requires revision before it can reach a wide audience.