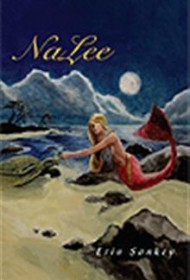 Erin Sankey’s wildly imaginative, contemporary fantasy for young adults begins with much promise. Chicagoan Frances Hennessey is a high school junior when his parents are killed. Sent to live with a grandmother he barely knew existed, Frances realizes quickly that Emma Gledstorm is like no other person he has ever met; she lives on her own private island off the coast of southern Florida, has a cheetah for a house pet, makes and sells her own revolutionary candy creations, and has an insatiable joie de vivre.

She tells Frances amazing stories about his family history that include infamous pirates, glorious love stories, and cold-blooded murder. In the short time that Frances is there, his grandmother facilitates numerous “once in a lifetime” experiences — flying in an Air Force fighter jet, experiencing a zero-gravity chamber at the Kennedy Space Center and more.

But these experiences pale in comparison to what Frances discovers in a secluded lagoon on the island: a young mermaid named NaLee. Together, they learn about the wonders of each other’s worlds. Frances is introduced to sea animals (a sea turtle, a killer whale, etc.) and mythical creatures (dragons) alike and the duo makes otherworldly discoveries while exploring underwater locales.

Given the plethora of exciting elements, the story had the potential to be a highly entertaining, all-ages, mermaid-powered fantasy, but unfortunately, the series of adventures never goes anywhere. There is no rising action or thickening of plot — only a succession of escapades that barely further the storyline and don’t build towards any obvious climax. A mystery concerning a creepy sheriff and the death of Frances’ grandfather arises, but even that is just hinted at.

The novel’s conclusion is more of a respite: readers learn that NaLee is essentially the foundation of another novel that will, presumably, follow this mystery to completion. The lack of any satisfying resolution, combined with a weakly developed and meandering storyline, make for a directionless and unfulfilling read.