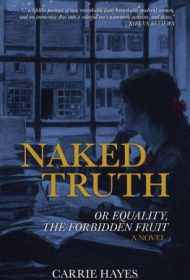 In a historical tapestry threaded with fact and language of the Victorian era, Hayes depicts likely circumstances and events early in life that forged the sisters’ notorious drive and conviction for women’s sovereignty and financial independence. It then recounts, with some literary flair and intrigue, their remarkable journey to become the first female stockbrokers, newspaper publishers and, for Victoria, a leader amongst suffragists and first female U.S. presidential candidate.

The author gives particular focus to the eagerness with which society’s elite (including the Vanderbilts, E.C. Stedman, and Gordon Bennett) courted the spirited sisters’ “amative attributes.” Their secretive liaisons (at times sexual) with high profile men are evocatively depicted, as is the sensational reporting and vindictive legal persecution of them for the same. The risk-taking sisters are well-characterized, through verbal sparring and their inner thoughts, and readers will engage with their battles against blatant double-standards, hypocrisy and individuals who sought to undermine them, including fellow activists and even members of their own family.

There are also problems, however. The large number of undeveloped tertiary characters are difficult to keep track of. The story also lacks smooth narrative transitions; there are, instead, copious section breaks with the new scene time and location simply headlined. Additionally, frequent inclusion of historical artifacts (e.g. quotes from letters and newspaper articles of the time) are jarring, slowing the pace and dampening the suspense.

The novel includes a two-page Dramatis Personae, indicating the breadth of its cast, and its three-page further reading list shows the depth of research undertaken.

Those interested in U.S. history and social change may appreciate the book for its interesting information, if not for its storytelling momentum.