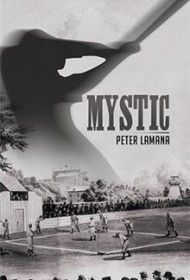 The author of this sentimental novel about early baseball obviously loves the national pastime and has poured his heart into the tale of an American Everytown coming to embrace it in 1867. In bucolic Mystic, he writes, “baseball helped new friendships blossom and grow” and gave people “something to talk about, other than war stories and frightful memories.”

Lamana’s strength is technical research. He weaves into his tale a deft history of baseball’s evolution from “old cat” and “muffin ball” into the first versions of today’s game. We learn how a “feeder” became a pitcher, and how much the “second-base tender” looked forward to the “chowder call” that followed every “match.” But he also lets slip into his serviceable prose jarring 20th-centuryisms such as “body clock,” “do his thing” and “icky.”

Mystic ends, as it should, with a giant named Hercules Handson smashing a homerun that “shattered time itself,” recalling Roy Hobbs’s legendary blow in The Natural. In a mediocre baseball novel, here’s a transcendent moment that reminds fans of why we love the game’s old rituals.