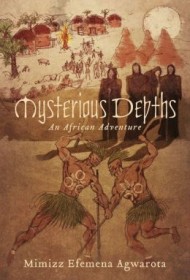 Secrecy, curses and vengeance challenge family love and devotion in this well-plotted drama involving an innocent young African woman caught up in tribal warfare that threatens her life and the lives of her loved ones.

The novel, set in an indeterminate time, opens with young Mamuke terrified by a seductive voice in the darkness of her room. The story then backtracks four days to the same young woman as she sets out to the Great River seeking salted fish and native chalk to ease the cravings of her pregnant sister, Sisim.

Her mission is caught short when a handsome prince tells her “you belong to me” and she is swiftly locked away in a strange room. Attempting escape, she is shocked to witness a horrifying ritual killing involving her brother-in-law, who had gone missing “three moons ago.” From there, the book’s actions quicken as tribal leaders scheme and frightening ceremonies and deadly battles ensue.

Scenes are vividly drawn in this complex tale, detailing everything from protective chants and healing medicinal potions to war strategies involving hot palm oil, poisoned arrows and angry bees. Readers are given insight into many tribal rituals, cultural myths and fears that threaten the lives of those who are deemed atypical or who anger the gods in some way.

The author’s writing is straight-forward with minimal flourishes (and includes her helpful glossary of terms) and the characters are aptly described, externally as well as in their minds and hearts. However, the protagonists are dimensionally thin, making it difficult for readers to form an emotional attachment to them.

Nonetheless, Agwarota’s novel is a page-turner, original in concept and filled with compelling details. It likely will be a draw for anyone interested in the cultural struggles of ancient African times powered by the gods, guardian spirits, love and evil.