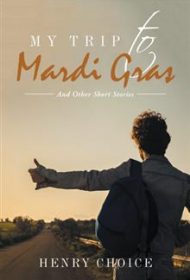 In this collection of three autobiographical stories, author Henry Choice writes of his travels, the politics of teaching high school and surviving Hurricane Katrina.

“My Trip to Mardi Gras,” Choice’s longest story, is also his best, detailing how Choice left his Midwestern home at 18 to experience life on the road. It was 1972, and he was suffering from “the disease of virginity.” His mother drove him to the interstate on a Monday morning; Choice stuck out his thumb, and the adventure began. He spent the next eight months hitching rides, smoking pot, panhandling, dropping the occasional tab of acid, and bumming around between coasts, losing his glasses, his boot, his backpack, and eventually, his virginity in the process.

Despite the plot’s occasional thinness, this story captures perfectly the era and culture in which it’s set and showcases Choice’s self-mocking wit, as in his frequent asides to readers: “It was a beautiful fall day. The sun was out and the air was crisp and fresh. (…Let’s have a little exercise. Everybody put down your books and try to describe Colorado mountains without the words beautiful, crisp, or fresh. Have fun, and get back to me on how you made out.)”  The story’s breeziness gives way to an unexpectedly poignant ending that imparts a haunting quality, making it a memorable read, especially for those who came of age during the ‘70s.

While “The Rise and Fall of a Dictator,” Choice’s behind-the-scenes story about teaching high school, might resonate with other teachers, it also may prove a bit too “inside baseball” for average readers. “My Affair With Katrina,” a first-person account of the daily struggle to survive in the aftermath of the storm, also pales alongside the title story, due to its failure to pack an emotional punch.

In the end, it’s the narrator’s voice from “My Trip to Mardi Gras” that gets under your skin and stays there; sad and sweet, like a song of the road.