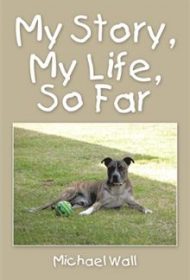 Author Michael Wall has had a life full of change and adventure. My Story, My Life, So Far recounts his leaving an abusive home and starting life over at age 16.

Wall left his home in rural England on his 16th birthday with a few pounds in his pocket and a small rucksack on his back. He flipped his parents the bird—his father was violent and abusive, and his mother didn’t protect him—and was suddenly his own man. Initially tent camping in a field, he’s taken in by a couple for a while, then bounces between odd jobs before finding work as a policeman. Two years in, he gets “itchy feet,” and when his vacation time comes around, he buys a one-way ticket to Australia with no plans whatsoever. More odd jobs follow before he finds work first in the Army, then later the ambulance service, where an injury forces him to retire early.

There’s a fair amount of Australian slang here that might puzzle readers who live elsewhere, but the writing is generally clear and straightforward. Unfortunately, Wall’s attitude often presents a problem. His insensitive comments about women can be offputting, and he seems equally insensitive to the issue of the segregation of Aborigines in Australia.  Describing a young friend’s death during Army training, he ends jarringly with  “LOL.”  He also sets up stories and then fails to finish them or changes the subject.  For example, he describes taking his new wife to meet his brothers on their honeymoon: “That was a mistake I won’t go into here.”

This volume is full of big stories, but despite the richness of material, it feels like a missed opportunity. The author’s callous tone and lack of detail will likely prevent the narrative from resonating with most readers.