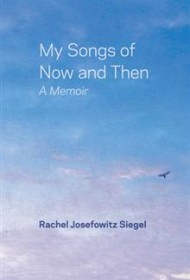 My Songs of Now and Then is written in a refreshingly direct manner. Here is a voice that doesn’t pretend or put on airs, but it does have behind it a sense of import.

Author Rachel Josefowitz Siegel writes from the perspective of her late 80s; she acknowledges without flinching that her life is winding down. She recounts both ordinary and extraordinary moments, touching on youthful milestones in Germany and Switzerland; marriage, motherhood, and grandmother-hood; and gradually coming into her own strong sense of self. She writes of her Jewish family’s arrival in America in 1939, of her work as a feminist therapist, of living in Israel for a time, of the values she has come to most honor.

Early in the book, Siegel quotes Roald Hoffman, who paraphrased an old midrash (instructive tale): “The jar of truth was shattered in heaven long ago; it is our task to gather the shards, the fragments, the pieces of truth.” This is a fitting metaphor for a deliberate effort to encapsulate the truths of a long and rich life, admitting that that there is still more to discover and understand.

Siegel doesn’t avoid (but also doesn’t unnecessarily linger on) topics including sexual stirrings, suicide, and challenges associated with aging. But her joy—in memories of family both departed and living, in her writing life, in the sensation of swimming, in the camaraderie within her retirement community—is lively and palpable.

One gets the sense that perhaps Siegel wrote this book chiefly with an eye toward a family legacy. But her words bring readers in as honorary grandsons and granddaughters. Readers can learn much from this life retold with honesty and gratitude.