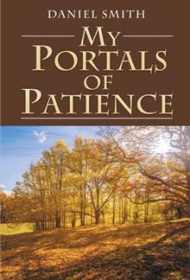 In the Christian tradition, patience is a necessary virtue for living a happy and faith-filled life. Unfortunately, as Reverend Daniel Smith points out, we seem to be in short supply of it in our modern age. The result, he argues, is detrimental. “[L]ack of patience,” Smith writes, is leading to a “bleeding world full of wars.”

In My Portals of Patience, a series of short reflections and meditations on the nature of composure and restraint, Smith looks at the lives of a number of biblical characters and demonstrates how patience—or lack thereof—affected their lives. For example, the author suggests it was Eve’s impatience that led to the first sin in the Garden of Eden. If only Eve had been prudent and waited before acting on her temptation, Smith suggests, the world might have been a very different place. On the flip side, the author praises Joseph of the Old Testament in his serene dealings with his jealous brothers who wanted him dead. Joseph’s enduring character leads to blessings from God.

Throughout all these examples (as well as some personal anecdotes about people Smith has met), the message is clear: Waiting is of great importance and can prevent us from making some very serious mistakes.

What isn’t so clear, unfortunately, is some of Smith’s prose, which is often muddled and puzzling. Just two examples: “Abraham, in all the attitude of his nephew Lot, he exercised a lot of patience.” And, “In any event, his strength for his obedience in this regard was very admirable, highly to be imitated.” Though readers can get the gist of the author’s ideas, these syntax problems make for very difficult reading overall.

Smith should be praised for writing about a trait that many people fail to recognize as a strength, but My Portals of Patience needs careful editorial work before it can reach all the people who could benefit from such a discourse.