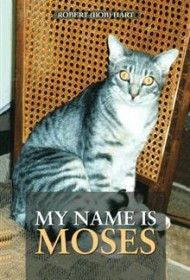 This short, often charming book is told from the point of view of Moses, a cat who was found abandoned in the woods and adopted by humans Carrie and Larry.

Moses needs lots of help and love to regain his strength, and he grows up to be a curious cat, chasing birds, exploring the world, and occasionally getting hurt. He loves his owners and they love him.

His story, as told here, is sweet and simple. Some of the descriptions of his activities will make cat owners laugh in recognition, as when he describes how Carrie keeps his water bowl full at all times, but he prefers to drink the water she’s using for crafts projects. “I really like best, [sic] drinking from Carrie’s bowl—I guess that’s because it’s hers, and I really like being right where she happens to be.”

The writing is casual, and while telling the story from the animal’s point of view is a funny premise. It occasionally falters when the description of events clearly conveys a human perspective (for example, baby Moses knows Carrie is heating beans in the oven to make a heat pad for him to sleep on). Most of the time, though, the narrative holds to the perspective of a cat trying to figure out human behavior. The type is large, as if in a children’s chapter book, and there are photos throughout, following Moses from bottle-fed kittenhood to what must now be retirement age.

While an ideal keepsake for the cat’s human family, Moses’ story has an insular feel and is confusing at times. For instance, the author is identified as Robert (Bob) Hart, but Moses’ owners are named Carrie and Larry. Is Hart a pseudonym? We don’t know.

All told, My Name is Moses doesn’t seem to be written with an eye toward a larger audience, though it might find fans among cat lovers who appreciate tales of their favorite creatures.