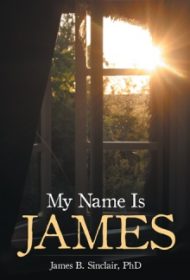 Memoirs often offer a glimpse of history we would not otherwise see. Author James Sinclair grew up during the Great Depression, served in the Army, and had an accomplished academic career, all while keeping his homosexuality carefully under wraps. My Name Is James looks back, and in so doing shows us how far we’ve come.

Sinclair writes in a witty, conversational style about life during the Depression; his father died when Sinclair was young, forcing his mother to move into her father’s home and work as his caregiver. Sinclair and his younger brother were welcome but largely ignored by their grandfather, a double blow to him since his own father also seemed to reject him.

As he grew up, he had numerous affairs and short-term romances with men before finding the partner he lived with for 47 years. He observes that in the 1970s, members of the gay rights movement worried that the movement’s first steps forward might result in a cultural backlash. “We never imagined same-sex marriage would become legal.”

The book has typos in need of correction, and Sinclair allows more than once in the course of the story that he has a generally poor opinion of women. This not only stops the narrative flow, but it leaves many potential readers less able to sympathize with what is otherwise a gripping story. Simply holding a job and renting an apartment required the utmost discretion at a time when discrimination was rampant; he and his partner made one mistake that an employer used to force him out of a job, a situation that would likely have a different outcome today.

My Name Is James has flaws, but they are minor. It’s not a mere survival story but a tale of thriving in life, told by someone once considered a second-class citizen solely because of who he chose to love.