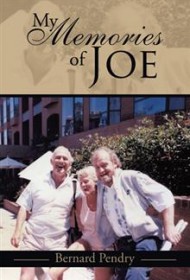 This slim volume inexplicably fails to mention anywhere on its front or back cover that the “Joe” in the title is Joe Cocker, the late singer who had a string of hits from the 1960s through the ‘80s. In this, author Bernard Pendry missed an important marketing tool, as that fact is sure to lure rock fans into this collection of his memories of the musician.

Pendry was an accountant who met Cocker through the rock star’s manager in 1972. The manager was a client of Pendry’s firm. His book gathers fond recollections of hanging out with Joe over the decades; they range from prosaic accounts of Cocker’s stays with Pendry’s family at their suburban English home to touring with Cocker and the Grease Band and handling each concert’s cash proceeds.

Pendry also includes memories from his children and ex-wife and from former musicians who played with Cocker. But mostly, the book is composed of the author’s diary entries, illustrated with plentiful snapshots of Cocker with Pendry and others.

Unfortunately, serious music fans won’t find the sort of details they generally crave here. The book lacks musical insight into Cocker’s bluesy rock and pop catalog and offers little biographical insight, outside of acknowledging his drinking and drugging habits. Nor does it delve into the seedier gossip we associate with insider memoirs of a rocker’s life.  Pendry also commits several unfortunate historical errors: He writes (twice) that Woodstock happened in 1966 instead of 1969; and states that Desi Arnaz was the “A” in A&M Records (it was Herb Alpert).

My Memories of Joe is interesting for its alternate, un-glamorized view of the rock star lifestyle—outside of Cocker’s incredible houses, the book shows that he was really just a normal person—but it’s not exactly a must-read unless you’re a serious Cocker fanatic. Those who can overlook its shortcomings will find a pleasant, albeit limited, look at Joe Cocker’s career, from an uncommon perspective.