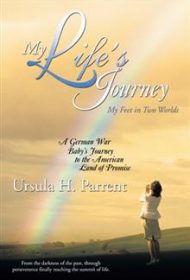 In this memoir set among the rubble of post-war Germany, Ursula Parrent recounts her coming of age under dire circumstances and her ultimate triumph over hardship.

Parrent was born in Essen, in 1942, at the height of WWII. Her first memories are of crowded communal housing where she and her mother and siblings were relocated in 1945. When her father was released from detention in 1947, having been cleared as an unwilling SS member, the family occupied a series of foul apartments until her father got back on his feet.

While she is optimistic, her life is troubled: her mother, pregnant with a fifth child and unable to secure an abortion, commits suicide, and her father struggles with ensuing bitterness. Yearning to escape the gray concrete rubble of her world, she eventually meets a German-born American GI who brings her to the U.S. as his wife.

Sadly, Parrent endures a loveless marriage full of heartbreak, intensified with the loss of an infant daughter from pneumonia. In time, she and her second daughter leave for the West Coast where Parrent’s luck changes. Eventually, she rises to management in a temporary service business, marries a colleague, and the two found a successful company.

Parrent is more chronicler than memoirist with her highly objective, orderly, and at times clinical descriptions that sometimes seem devoid of feeling and reflection. The narrative is often choppy, but the storytelling’s intensity keeps readers cheering for her. While Parrent finds what she yearns for—a life of adventurous travel, golf, skiing and more—the book ends on a melancholy note: She struggles still with depression, alcohol, and the grayness of life “that’s constantly changing as time passes.”

The author reports that writing her memories, although painful, helped her to stop living in the past and “embrace life to the fullest.” Her story will appeal to WWII survivors who venerate the memory and challenge of bridging two worlds: old and new, past and present.