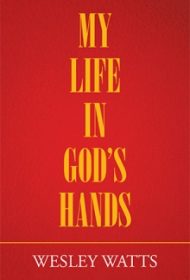 “Wes, the only way that other people will know what God has done in your life is if you tell them,” says a pastor to the author. And so Watts penned My Life in God’s Hands, beginning with his 1932 birth in Baltimore, and continuing chronologically through the highlights of his life.

Now 85, Watts remembers seeing the Lone Ranger at the local theater when he was about nine years old. “With my two cap pistols at my side, just in case any of my heroes needed help, I was ready,” he notes.

Years later, his mother asks him about his plans for his life, adding that if he was thinking of marrying the girl who lived up the street, “it will be over my dead body.” Four weeks later, his mother is dead, he marries the girl, and the entrepreneurial spirit sparked when he was ten, earning 25 cents a day at the local grocery store, eventually leads to his owning two gas stations. He writes of his family, his retirement, his wife’s dementia, and her eventual death after 64 years of marriage.

Watts notes that he wanted to be an altar boy and had an interest in the church, although an awareness of God was initially absent. “In fact, I did not know who or what he is.” His personal decision to trust in God seems to have evolved over time. Unfortunately, this spiritual journey is not discussed with any depth, despite the title’s promise.

The narrative is conversational, as if Watts’ was recounting life “back in the day,” but contains errors: Several chapters are untitled, and inconsistent time frames make tracking events difficult (e.g., a son married in 1971 had a son born in 1942).

While his story lacks the narrative flair of more accomplished memoirs, Watts delivers an entertaining glimpse into his life—a time when hard work, determination, and faith provided an honorable means of putting supper on the table.