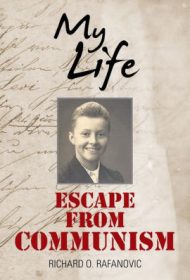 In My Life: Escape from Communism, Richard Rafanovic chronicles his life growing up in Czechoslovakia on the eve of WWII and his survival during the ensuing conflict.

Born in 1929 in Kosice, Czechoslovakia, Rafanovic remembers his early childhood as happy and peaceful. That calm ends upon the German occupation of Czechoslovakia beginning in 1939. While attending secondary school, German forces abduct Rafanovic and his peers, forcing them to dig trenches along the Czech eastern front. When the Russians subsequently defeat his German captors, Rafanovic escapes their control and embarks on a peripatetic life where he undertakes a succession of odd jobs in eastern Europe until the war ends.

While in a displaced person’s camp after hostilities end, he notes, “There were no bottom limits for me, and pride was never an obstacle to survival, even under adverse conditions.” As the Iron Curtain descends, Rafanovic contemplates whether to remain in Europe or seek a new life elsewhere.

Rafanovic’s memoir details his early life into young adulthood chronologically and with unadorned language. In short chapters, he details his personal experiences and the historical backdrop. Prior to the German invasion, his contentment is apparent as he recounts memories, from learning to ride a bike to first loves. Despite some choppiness, these anecdotes add charm to an otherwise lackluster text that seems particularly dry when summarizing political events.

At times, he interrupts his narrative to deliver a diatribe, such as when he intones that “In the United States, we often engage in battles but restrict our military from taking decisive and winning actions…Sometimes we are even stupid enough to leave the defeated country their arms and their political infrastructure while we are babbling on about democracy…” These diversions break the story’s flow. Additionally, the inclusion of a timeline would provide greater context to the author’s personal experiences.

Despite these flaws, the memoir stands as a testament to Rafanovic’s indomitable spirit. Interested readers will look forward to the promised sequel.