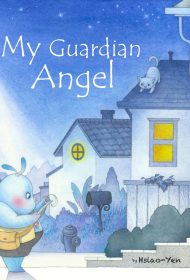 Guardian angel Taber is assigned his newest child to watch over, a baby named Sophie, and he goes to meet her in her crib. Many months pass, and Taber becomes Sophie’s favorite playmate, but as she grows, her parents start to think Sophie is talking to her invisible friend too much. On Sophie’s third birthday, Taber takes her for a special flight high in the sky. He then says goodbye while an exhausted Sophie sleeps. The next day, Sophie still wears Taber’s old necktie as she stares out the window, but the question of whether she remembers him is left charmingly unanswered.

The story and text are both admirably composed, but the most striking aspect of My Guardian Angel—and perhaps any successful children’s picture book—is its gorgeous illustrations. Every image creates a world unto itself, with vivid details, such as the bandages on Taber as he and Sophie play doctor, or the many guardian angels visible in a park scene with other kids, or the dreamlike, doll-house simplicity of a cutaway view of Sophie’s home.

In conjunction with the author’s incredible pencil and watercolor art comes first-rate book design, from the cover to the excellent interior touches, such as flaps that first show what Sophie’s parents might see—Sophie talking to air—but underneath, reveal Taber in a series of amusing vignettes.

Despite opening with a classic pearly-gate image of heaven, My Guardian Angel doesn’t go for an overly religious tone. It’s a book that should appeal to a wide audience—one that children and parents can repeatedly enjoy for its story, its characters, and its wonderful illustrations.