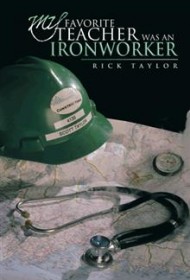 Dr. Rick Taylor’s cathartic, inspiring memoir, punctuated by his youngest son Scott’s optimistic world-view, is an excellent guide to living life as well as possible. Funny, sad and thought provoking, Taylor’s recollections revolve around the discovery that life’s lessons can be learned from those we least suspect — in this case, Taylor’s precocious son Scott.

Growing up in 1950 Surry, Maine, Taylor felt uneasy on Sunday nights riding his bicycle past a nearby graveyard to his friend’s house to watch television. However, years later, after diving into a raging Spokane River to pull 3-year-old Scott to safety, those childhood fears were washed away. Taylor discovered that he only feared the things that would hurt the ones he loved.

He also learned from his young son to take sports less seriously. Though a competitive Little Leaguer, Scott’s attitude was that winning isn’t everything; he would congratulate the opposing team, whether his team had won or lost. In relationships, Scott taught his father that after the romance has faded, “girlfriends” can become “girl friends.”

Taylor, a medical doctor, writes that Scott, eventually standing six-foot-five with huge arms, never thought of being a teacher. Like his grandfather, he loved “real man” work — building bridges, buildings, etc. As a medical intern, Taylor expected to learn from his colleagues. But through Scott, he discovered that if you pay attention to all kinds of people, you will learn amazing things about life.

In telling his story, Taylor is a little heavy-handed relating heart-wrenching moments. Misspellings (The Beattles, Thru), and other mechanical errors will be a slight distraction to discerning readers. And while most of his stories ring true, Taylor admits his memoir “is a combination of fiction and reality.”

Nonetheless, the lessons here are compelling. In a bittersweet reflection at the end, Taylor laments his graduate course work in life will not be complete until he follows Scott, 29, (who died in an accident) into the next phase of life’s journey.