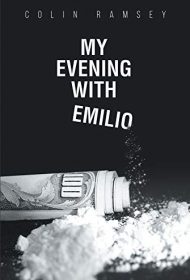 When a soon-to-be-divorced man is summoned to dinner by his wife’s father, he’s expecting pressure to reconcile with the man’s daughter. But the night that ensues in Colin Ramsey’s My Evening With Emilio turns out to be a surprise.

Father-in-law Emilio Escobedo is a convicted drug smuggler who made himself into a “brilliant jailhouse lawyer” while doing his time. As the two men dine in a New York City restaurant, Emilio asks, “What do you think about going to London?” Emilio, who refers to his son-in-law as “buddy,” says he wants him to meet the man who taught him law in the U.S. Penitentiary.

Then, Emilio’s mood turns and he begins reminiscing about his days as a pilot and the worst decision he ever made. “I used to love to fly, and I was a damn good pilot, buddy. My whole life changed for the worse because I was a good pilot.” Emilio goes on to share how he was drafted into the drug-smuggling business, flying millions of dollars of cocaine into the U.S. and Mexico, and relates his efforts to avoid being caught.

This is initially a page-turner full of risky flights, close escapes and high living, as well as details about flying and prison life. But the plot evolves into one long-running monologue by Emilio with not a word or reaction from anyone else from page 21 to 98. The protagonist is never named, and it’s unclear if his name really is “Buddy,” since it’s used as both a proper noun and not. Likewise, there’s no sense of when Emilio’s daughter came on the scene, popping up here only after he’s featured on America’s Most Wanted. The subject of London doesn’t arise again, nor does the mentor Emilio wants Buddy to meet.

Overall, readers will wish for more coherency, as well as greater interaction between Emilio and his son-in-law, in this tale. To attract a wide audience, the story requires thoughtful revision.