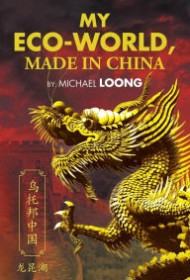 China, according to Michael Loong in his book, My Eco-World, is in dire straits. Faced with severe pollution, dwindling resources, millions of unemployed and a lack of affordable housing, the nation could “turn into an inferno of social uprising” if current trends are left unchecked.

As a solution for China’s tribulations, Loong points to a government plan to build 400 “eco-cities” and restructure China’s social and institutional underpinnings. By considering everything from water reclamation to the flow of traffic and the building of affordable homes, Loong believes that these proposed cities could be environmentally and economically sustainable. Funding this, Loong says, would be $1 trillion from the Chinese government plus help from Chinese philanthropists, the U.S. Treasury Department and private fund managers.

Many aspects of the plans Loong describes depend on high-tech solutions.  Apartment components, he suggests, could be made by 3-D printing. Children could be taught by “robotic teachers who resemble good-looking human beings pleasantly dressed.” The elderly and hospital patients could be tended by robotic caregivers.

It’s not clear from the book whether the specifics of these plans are the author’s dreams or actual government projects. Has some enterprising company already developed robots capable of turning a patient in bed or fixing an elderly person’s meal?  Has technology advanced enough that such robots could be mass-produced in the near future?  Loong doesn’t say.

The author also has a problem with repetition and a tendency to wander off topic. For instance, Loong repeatedly brings up Japan’s aggressive role during WWII and laments U.S. diplomatic connections with the country. In addition, grammatical issues (tense-agreement problems, dangling clauses and run-ons) often impede the reader’s digestion of his ideas.

Although Loong describes some creative proposals that may be of interest to those who are actively considering China’s future, his book requires some revision before it can appeal to the general reader.