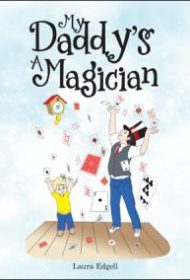 Written by the wife of a magician, My Daddy’s a Magician captures the enchantment of card tricks and other magic acts from the perspective of a young child.

The concept of My Daddy’s a Magician is straightforward and effectively relayed by the title: The story is told from the perspective of a young boy whose father often performs magic tricks. The book is mostly descriptions of various tricks, such as: “I once saw daddy make a snowstorm appear from his hands, and I danced and jumped in the snow where I stand.” Or: “Things fly and disappear and then reappear behind my ear.”

Each trick is illustrated with a simple, understated drawing. The book concludes with the narrator vowing to himself become a magician one day.

While My Daddy’s a Magician captures the excitement of its young narrator at having a father who can make objects appear, float, and disappear, it doesn’t go much deeper than this. It doesn’t present stakes, obstacles, or challenges, and as a result, it fails to carry emotional weight or impart a lesson. There is also little tension to propel readers forward.

In addition, while some passages rhyme, they aren’t arranged in stanzas to make the rhymes easy to identify. Meanwhile, some passages have no rhymes at all. The inconsistency is jarring and makes reading aloud less fluid than it could be.

A sense of awe and love infuse the pages of this book, but correcting the flaws mentioned above would greatly enhance its appeal.