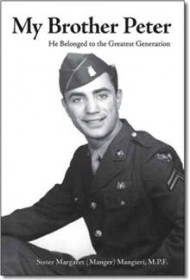 Infused with love and faith, Filippini Sister Margaret Mangieri’s ode to her only brother celebrates his life and honors his death as a soldier in World War II. In My Brother Peter, Mangieri collects the heartfelt memories of family members, schoolmates, and fellow soldiers to create a portrait of a patriotic young man who died serving his country.

Army Corporal Peter Manger (a simplified spelling of the original family name, Mangieri) died in combat in1945 at the tender age of 20. His story echoes those told in Tom Brokaw’s popular book, The Greatest Generation, which inspired Mangieri to authorship. A literary quilt of sorts, Mangieri’s book assembles an assortment of artifacts to document her brother’s life. Photographs, flight logs, and reproductions of official government documents bring Peter’s story to life. Mangieri also includes examples of Peter’s poetry.

A certain intimacy is suggested by handwritten letters home and the original poetry, but Mangieri does not analyze them, preferring instead to let the original words speak for themselves. Relatives writing about Peter mention only his good qualities: amazing athleticism, strong religious faith, and patriotism to his country. Likewise, Peter’s poetry and letters are uniformly upbeat, though he occasionally expresses self-doubt about his abilities as a soldier. For the most part, Mangieri does not include his mistakes or flaws, which leads to an improbably perfect portrait of her beloved brother.

While this is to be expected from a loving sister, it makes less interesting reading for those interested in the more complicated aspects of human nature. As such, My Brother Peter succeeds as a family scrapbook to be cherished by those who knew Peter, but has limited appeal to a wider audience.

BlueInk Heads Up: Although it’s a family scrapbook at heart, My Brother Peter also contains reproductions of historical documents that may be of interest to history students, particularly those studying World War II.