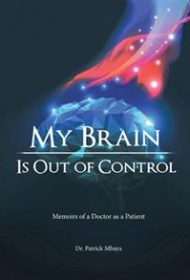 My Brain Is Out Of Control is a simply written account of Dr. Patrick Mbaya’s experience with a brain abscess and its symptoms, both physical and emotional. While treatment was ultimately successful, full recovery was only achieved gradually over a period of several years.

A UK psychiatrist, Mbaya notes that he hopes his book will help others “better understand me as an individual,” allow doctors to see things from a patient’s perspective, and to provide hope to others suffering from brain disorders and depression.

The author was 55 when he suddenly experienced slurred speech and increasingly weakening limbs on his right side. He also found himself crying a lot: “Seeing faces of people close to me or hearing their voices on the phone made me cry. I began to fear that my brain chemicals were out of control.” After a scan revealed an encapsulated infection in his brain, he was told “there was a 50 per cent chance that I might not regain my speech (and power), and even if I did, it might not recover completely.”

Generally, the author is a compliant patient, although he endearingly admits to little infractions, such as hiding forbidden antacids and Snickers bars. After four weeks in the hospital and a four-month home recuperation, he returned to work part-time, although his speech was not quite normal.

Mbaya interweaves accessible and informative basic brain science into his story. The personal information is written as diary material and reads as such, mundane comments and all (“I went to have a long shower, which helped me pass the time”). While these small, everyday moments make the author relatable, they rob the story of any sense of suspense or tension that would compel readers forward.

Overall, general readers will likely wish for a more powerful narrative. Still, those interested in the recovery process for this type of affliction will find some useful information here.