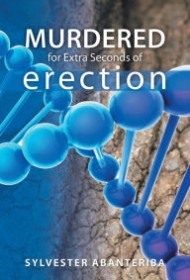 Although Sylvester Abanteriba’s latest release has bland cover art and a title that will almost definitely be misunderstood (this isn’t a comedic mystery or noir erotica) and even mocked, the storyline of Murdered for Extra Seconds of Erection is highly original and impressively ambitious.

The situation is made exponentially worse when the UN passes a regulation that essentially forces all women to wear burqas until the issue is resolved. Islamic leaders, offended that nonbelievers are wearing the traditionally Islamic garment, want the directive repealed. Tensions rise, and soon radical religious groups from varying religions begin issuing threatening ultimatums. As the civilized world heads toward a potential apocalypse, scientists race to unravel the mystery before it’s too late.

Although this certainly isn’t a perfect novel—the beginning is much too slow and unfocused, and the characters lack depth—the author has to be applauded for writing such an audacious narrative. The revelation at novel’s end, for example, is truly shocking, and while some readers may have trouble swallowing the implausible twist, others will find the deeply spiritual and wisdom-filled message satisfying.

For those wondering: There is no graphic sex in this novel. The author handles the premise with tact and explores the affliction with deep scientific and spiritual speculation. Title and cover art notwithstanding, this is a unique story that offers readers some unexpected rewards.