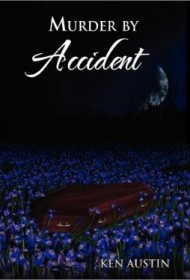 Despite its title, Ken Austin’s Murder By Accident downplays murder and instead focuses on two families in the wake of a fateful car accident. There is a murder — an innocent woman is killed instead of an intended target — and there is a tragic death from the accident — the daughter of the main characters, professor Randolph Anderson and his wife Irene. But the book’s theme is really revenge and repressed, seething anger. It’s not so much a whodunit as a psychological sketch of characters reacting to life’s sudden stresses.

Irene Anderson is filled with rage because her husband didn’t pick up their daughter from a dance class, and she had to do it. On the way home, Irene runs a red light and hits Chip Caruso, the son of a wealthy construction magnate who’s driving drunk. After the Anderson’s daughter dies, the two families’ fates are intertwined. Randolph Anderson’s estranged twin brother Jonathan, who hates him from a childhood incident, is the wild card who ends up being important, but not in the way readers might think.

The story has compelling elements, but ultimately is hampered by clunky writing and weak editing. For some reason, the book is written entirely in the present tense, making for some awkward plot transitions, and in many scenes, there are too many details that don’t add to the story. Austin also has a tin ear for dialogue, using phrasing that normal people simply wouldn’t say in conversation, such as “…I feel a heavy onus is on me.” And Austin sprinkles brainy words throughout that have the unfortunate effect of derailing the story’s momentum, such as “…a modicum of smug satisfaction.”

Murder By Accident fizzles out by the end, and the finale is anticlimactic. The story itself is not to blame — Austin came up with an interesting plot. But the execution stumbles, and in the end we don’t care enough about the characters to make the novel resonate.