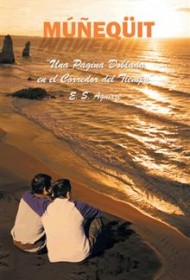 Múñeqüit, a novella set in Puerto Rico, is about the turbulent relationship between two handsome, intelligent, young men: Esteban, who enjoys casual encounters with other men, and Ofir, who loves him but tends to be pathologically jealous. In the end, the problems they face will eventually drive them apart and end in tragedy for one.

Though this basic boy-meets-boy, boy-loses-boy plot moves along nicely and the writing engages (except for the vague and trite-sounding similes and metaphors used in a few graphic sex scenes), spelling mistakes, grammatical errors and poor punctuation weaken the novella’s potential appeal. In some parts, dialogue between characters is written in one paragraph, making it difficult for the reader to know who is talking.

While there are some spare descriptions of the characters’ romance that draw readers in, overall, the main, and especially the secondary characters, feel one-dimensional. For instance, the vendedor de sueños (“dream seller”) is mentioned as someone who not only broke Esteban’s heart, but who was the catalyst that led Esteban to meet Ofir in a chat room, but the reader receives only skeletal descriptions of this person. In addition, toward the end, the author drops in a child character who, it turns out, can only be seen and heard by Esteban, a plot element that is ultimately ineffective to the storyline.

Unfortunately the ending, which has an interesting twist, falls flat. If along the way, the author had set up what was to come a bit better, it might have been more satisfying.

Ultimately, the author needs to develop his characters and plot more fully in order for Esteban and Ofir’s story to attract a wider readership than is likely possible in its current version.