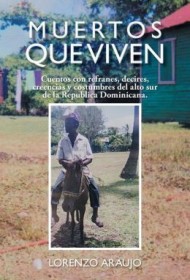 This collection of 13 fictional stories set in the Dominican Republic, where author Lorenzo Araujo was born, provides a window into the country’s traditions and everyday life. Full of charm, the book is replete with cautionary tales, anecdotes, sayings, and beliefs from the island nation, including the story “Ábrete, mamacita casindorada” (“Open Up Little Golden-Housed Mother”), a retelling of a popular oral fairy tale.

Among the strongest of the stories are “La buena suerte de Martín Gafo” (“Martín Gafo’s Good Luck”), which contains memorable descriptions of blooming flowers in cane fields, and “La muerte de Anacleto” (“Anacleto’s Passing”), perhaps the most moving and most carefully constructed of the offerings. The story is about how protagonist Anacleto was forcefully conscripted into the army. While on the way to headquarters, Anacleto and a group of soldiers are ambushed and he is shot in the groin, ultimately bleeding to death. The only survivor is Antonio, who witnesses Anacleto’s death and is forever marked by it.

“La vaca vieja” (“The Old Cow”), the last story in the collection and perhaps the most ambitious, is confusing due to the large number of characters. The inclusion of a family tree for the characters, such as the one offered in One Hundred Years of Solitude, would greatly enhance readers’ ability to follow the story.

Overall, this is a satisfying read for adolescents and adults. Some of the stories include a moral, which may alienate more sophisticated readers who are accustomed to reaching their own conclusions. In addition, minor spelling and grammatical errors, such as the incorrect usage of semi colons and commas, could be easily fixed with the help of an editor. If the author addresses these issues in the next version, his well-developed characters and situations are sure to entertain a wide audience.