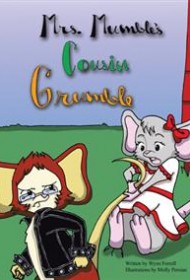 Mrs. Mumble’s Cousin Grumble is part of Ferrell’s series of Mrs. Mumble books. In this installment, the focus is on Cousin Grumble, who, true to his name, grumbles about everything. He’s thrown out of school for causing trouble, and Mrs. Mumble talks him into giving it another try, with less complaining. Grumble makes the most of his second chance, but his friends now suggest that his name isn’t reflective of such good behavior, and that he should pick a new name, more suited to his new personality. Grumble considers many new names, but in the end, decides to keep his own, saying, “Now I know your ACTIONS tell who you really are.”

Ferrell’s rhyming text is smooth and clear and is fun to read aloud, with only a few minor missteps, such the inconsistency of tense in this passage, which otherwise demonstrates the author’s solid command of rhythm: “Cousin Grumble told his friends that he was always right. And if any of them disagree [sic], then he’d begin to fight.”

The story has two main components: Grumble’s change of heart (and behavior) in the first part, and Grumble’s name dilemma in the second. The characterization is kept simple, which is effective for conveying the story’s two morals, but perhaps not enough to make the characters truly stand out in the crowded field of children’s literature. The illustrations by Molly Persian, too, are effective for the story but not distinctive when compared with other children’s artists.

Even so, Mrs. Mumble’s Cousin Grumble’s rhyming text is enjoyable, and the story provides a solid read for its young audience. With a bit more attention to detail and the steady improvement that often comes with experience, the Ferrell-Persian team (and Mrs. Mumble’s crew) may be looking at many successful future volumes.