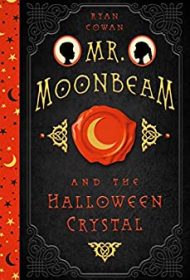 In Ryan Cowan’s exciting children’s book, Mr. Moonbeam and the Halloween Crystal, a group of witches and sorcerers quickly work to stop a powerful dark sorcerer from taking over two worlds.

Noir, a vicious evil sorcerer, is after a crystal that is crucial to his quest of ruling both the magical and non-magical worlds. Meanwhile, Elliott, a young sorcerer, struggles to learn how to contain and use his magical powers. His teacher, Mr. Moonbeam, has been appointed to guard the non-magical world and help Elliott harness his powers.

As Halloween draws closer, Noir hatches a plan to enter the non-magical world and finally achieve dominance, and Mr. Moonbeam and his friends must utilize all their powers to stop him. Elliott, who learns and improves with each passing day, becomes a crucial part of their strategy.

The story is engaging as it paints vivid descriptions of Moonstone, the magical world. In Moonstone, residents live in little cottages and magical castles along its enchanting countryside. Well-wrought red and black fire-breathing dragons, werewolves, vampires and ghosts inhabit The Dark Lands, which are controlled by Noir. The story also takes place in the non-magical world, where some witches live secretly amidst humans. The people who live in this world are oblivious to the magic going on around them.

Readers will enjoy watching Elliott’s growth from someone unsure of his abilities and intimidated by his friend, Sabrina, a young witch who can fully utilize her powers, to a sorcerer confident in his role and abilities.

Unfortunately, aside from a few minor characters, the non-magical world is sketchily developed. Since this world is mentioned many times in the story and plays an important role in Noir’s plan, the dearth of details renders this part of the story rather weak.

Nonetheless, Mr. Moonbeam and the Halloween Crystal is a compelling children’s story that will appeal to young fans of fantasy literature.