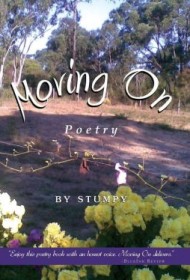 June Hilton-Clements is not afraid of being herself, a fact that becomes obvious in the first few pages of her poetry book Moving On. Aside from a somewhat unlikely nom de plume (“Stumpy” is a childhood nickname provided by her father), there’s also the unpretentious title of the first poem: “In Need Of A Beer.” This lack of airs lets Stumpy get down to ground-level profiles of people and nature, in a genuine, undisguised way.

Stumpy writes her verses with end rhymes, and while this might seem to constrain the number of suitable topics, the author employs the style to convey surprisingly varied content: it works for lighter poems, and even for serious subjects tackled with a playful twinkle, such as “The Mistresses Lament.” On the down side, the pattern grows tedious after a while, and the steady rhythm, page after page, also curtails Stumpy’s ability to express a full range of emotions.

There are distractions here that an editor could have improved upon – occasional misprints and misspellings, and poorly reproduced drawings—but even these flaws are endearing at times. Readers often feel a personal connection with the author, as in the poem “Bliss, Blasphemy, And Belief”: “Many joys of light and sound and pleasure all abound,/ Not from cost, not made by man, nor bought with cent or pound.”

Moving On will not be to the taste of readers who enjoy a modern, free verse style. But Stumpy shows that there is much to be mined within the limits of the end-rhyme, and for readers who enjoy poetry with an honest voice, Moving On delivers.