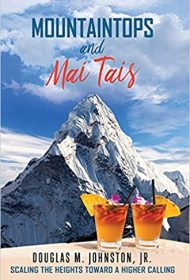 Described by Christianity Today as the father of faith-based diplomacy, Douglas M. Johnstone recounts his personal life and work with the International Center for Religion & Diplomacy (ICRD) in Mountaintops and Mai Tais.

Early on, Johnstone displays a cheerful attitude toward adversity. For example, he relates how, at age four, he was diagnosed with tuberculosis of the left ankle and sent to a sanatorium for two years, tied to a bed with his leg in a cast. Each night, after lights-out, he untied himself and hopped on one foot to join the other children in playing cards.

As a 22-year-old Naval officer, Johnstone served on submarine surveillance operation to Northern Russia. His first glimpse of Russia was through a periscope. He muses: “I began to wonder what would happen if I got caught…I thought that if they pulled out my fingernails maybe I could hang tough – but maybe not; I don’t like pain.”

Following a career in the U.S. Navy, Johnstone worked for the federal government, at one point becoming Deputy Assistant Secretary of the Navy for Manpower. After retiring, he created the ICRD, a non-profit dedicated to using a spiritual basis for conflict resolution in international relations. His work often focused on the Middle East. “In the U.S. contest with militant Islam, mention is often made of needing to ‘drain the swamp [of terrorism],’” he writes. “Bombs and bullets certainly have their place; but more often than not they breed more terrorists as the cycle of revenge takes hold.”

Johnstone’s book would have been better split into two works, one a personal memoir, the other a look at global politics. The latter could have been a useful text for students of international relations. Both parts, however, suffer from problems: too much irrelevant detail in the first part, such as passages about his dog Spooky or 1953 Plymouth, and too much repetition in the last part. A judicious edit would improve the book overall.