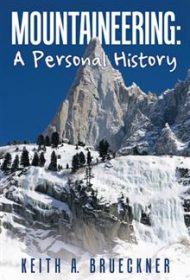 Mountaineering: A Personal History is Keith A. Brueckner’s posthumously released first-person chronicle of a lifetime spent in vertical pursuit.

For nearly six decades, from 1938 to 1996, Brueckner pursued mountain climbing challenges in Europe and North America. His passion for high places carried him from the Alps to Yosemite’s El Capitan wall and up difficult peaks in Colorado, Wyoming, Montana and California. Brueckner last visited Chamonix, France at Mt.

He starts his story with keen insight: “Memory of climbing is often dulled by the passage of time,” the author writes in the book’s introduction. “The moments which endure in memory must have special qualities—of beauty, supreme effort or fatigue, uncertainty, unusual apprehension and fear, long hours of hunger or thirst, cold, wind, and cloud, loneliness.”

Sadly, that early insightful prose is missing from most of the book, which is oddly and highly impersonal. Mountaineering: A Personal Journey quickly becomes a chapter-by-chapter description of things climbed. Brueckner writes in great detail about meals, routes, hardware and technique. His enthusiasm wanes when writing about anything personal. Wives, family members, friends and other climbers—some quite famous—appear only as names. By book’s end, little has been revealed about Brueckner or his life outside of climbing. The author’s career as a world-renowned physicist deserved at least a mention.

Mountaineering is an accurate record of Brueckner’s many climbs. Photographs included are poorly reproduced on paper stock but are still dramatic, offering glimpses into climbing history and providing some understanding into Brueckner that the memoir does not.

Overall, Brueckner writes informatively about training and technique and thoroughly describes routes on dozens of complicated climbs. This is likely to be of interest to climbers who prefer their reading uncluttered by personality. Family and friends or those interested in Brueckner will also appreciate Mountaineering.