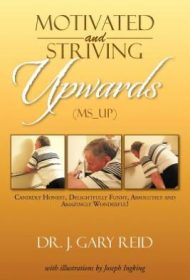 Dr. J. Gary Reid explains up front precisely what his book is about and what it’s intended to do. “I have learned many, many ‘simple’ things that make my life easier and more pleasant,” he writes on the back cover of Motivated and Striving Upwards (MS_UP). “I wish to share these things with you.”

In this volume, which unfolds as part advice, part personal experience, the retired Air Force aerospace engineer describes what it’s like to live with multiple sclerosis, which he has done for four decades. For those unfamiliar with MS, Reid clearly explains what the disease does to the body without getting overly emotional or, for the most part, resorting to clinical jargon. With a sense of gratitude, he plays up the improvements he’s seen from using an electric wheelchair and a magnetic seat cushion, among other things, and concludes with three short appendices with tips for dressing one’s self.

The prose is down-to-earth, conversational and warm. But it’s Reid’s vulnerability and openness about topics such as not getting to the toilet on time, along with his lighthearted attitude that makes us keep reading. Consider, for example, the time he accidentally shifted his new, powerful wheelchair into high gear and smashed the sheetrock, or the time he fell while trying to maneuver his scooter onto a curb. After Reid explains “I have MmmmSssss” to an onlooker who assumes he’s drunk, the man replies to Reid’s wife Cindy, “Yes, he certainly is a mess.” Joseph Ingking’s accompanying illustrations offer further comic relief.

The book suffers somewhat from an overabundance of exclamation points and a smattering of typographical errors, as well as disconcerting tense shifts, sometimes mid-sentence. And the overtly religious ending might be a bit heavy-handed for some.

Nonetheless, readers with MS, as well as family members, friends and caregivers, should appreciate this slim volume. Even those not directly connected to the disease will find the author’s contagiously positive message worth the read.