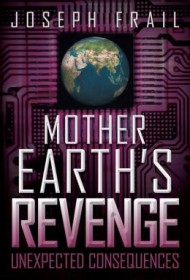 Mother Earth’s Revenge: Unexpected Consequences, an apocalyptic adventure novel that too frequently strays into manifesto territory, explores a fantasy future in which the Earth fights back after generations of human neglect and abuse have led to worldwide chaos: oil supply wars, overharvested forests, polluted oceans, food shortages and riots.

Author Joseph Frail sets his story in Springdale, Missouri, where normal life has turned extraordinary, particularly for the Goodman family, who awaken one morning feeling as though they are “all connected by an internal data link.” Their perceptions have sharpened overnight: William, his wife Carolyn and their kids can not only hear each other’s thoughts but understand animals as well. Four-year-old Craig suddenly becomes an algebra whiz, and his older sister Rachael begins receiving psychic messages. Frail’s intimation is that these new powers are all part of Mother Earth’s master plan to create a higher consciousness among the planet’s inhabitants, leading them to a more peaceful, sustainable mode of existence.

Too often, however, Frail turns from what could be the evolution of Earthlings to current-day troubles. War, crime, environmental damage and government corruption take center stage, and the momentum toward a solution falters. Rapid scene and perspective changes – from the Earth’s own voice, to an omniscient third-person narrator, to the whitewashed reports of the Galaxy News Corporation – limit the development of the Goodmans’ story, which Frail revisits at brief but frequent intervals.

Add some awkwardly phrased declarations (“The essence of man is contrary to the change of his own existence”) and less-than-vigilant attention to grammar and punctuation, and sticking with Frail’s message becomes challenging.

Further polishing would allow Frail to better convey his fascinating premise that our planet is a powerful, intelligent force that can change its own future. As it stands, Mother Earth’s Revenge struggles to grow beyond the initial idea into a truly captivating story.