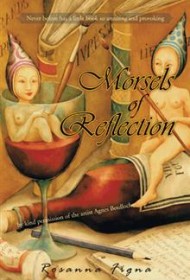 “In hunting, the pleasure of giving death exorcises the fear of receiving it.” This is just one example of the aphorisms collected in Morsels of Reflection, a small but thought-provoking volume. Author Rosanna Figna had a friend provide annotations to many of her quips. Sometimes they help illuminate her meaning, but other times they obscure the view.

When Figna writes, “A fortress that is all wall doesn’t interest me,” readers are free to draw their own conclusions as to meaning. Rather, they would be, but for the note attached: “This is an allusion to the fascination of the oriental warrior to our own homespun castle with its drawbridge.” What may have resonated widely is now rather constrained. Similarly, the simple statement “I like digesting” could actually mean many things, but not when it’s annotated with three lines about belching.

Some passages aren’t annotated, leaving your imagination unbridled. One such aphorism is: “Sometimes I feel like a Siren who has been seduced by Ulysses.”

These works are translated from the Italian, but the English is clear and reveals Figna to be intelligent, funny, sensuous and wise. Some of her observations (“If you’re near sunset, you like dawns”) are universal and eternal, while references to Yoda, pop musicians and an abiding love of the hazelnut spread Nutella place her squarely in the here and now.

Morsels of Reflection is a little scattered, but that makes the discovery of a treasured quote more rewarding and the pleasure at finding one you love almost as delicious as a spoonful of Nutella.